Looking at the role of the Dutch Government in SDG partnerships

The Dutch government reckons it is on the right track to meaningfully contribute to the SDGs. But questions on how, when and with whom remain.

What is the role of the Dutch government in public-private partnerships (PPPs) for the SDGs in the coming years? This was the central question in the PPPCafé discussion on 28 June, which gathered professionals (intending to or already) working in partnerships.

As the Sustainable Development Goals (SDGs) have become an intrinsic part of the strategies of some of the organisations represented, the meeting started out with the question on what particular SDG participants had been working on that morning. The goals focused on gender, climate, food security and water & sanitation emerged as the most frequently mentioned goals.

Goal 17, collaboration between partners, emerged as the preferred goal among participants, as many fulfill broker roles in development partnerships, bringing together different sectors – both in the Netherlands and in developing countries.

Many companies in the Netherlands have taken the SDGs on board. But especially right after the 2016 launch, SDG washing (using the SDGs as communication tool without much actual adaptation to strategy or measurement of their impact towards the Goals) has been common.

There has been much improvement, however companies still have a way to go in prioritising their efforts on where negative impacts on SDGs are most severe. NGOs could be playing a supportive role in this process, hence the need for cross-sectoral partnerships. 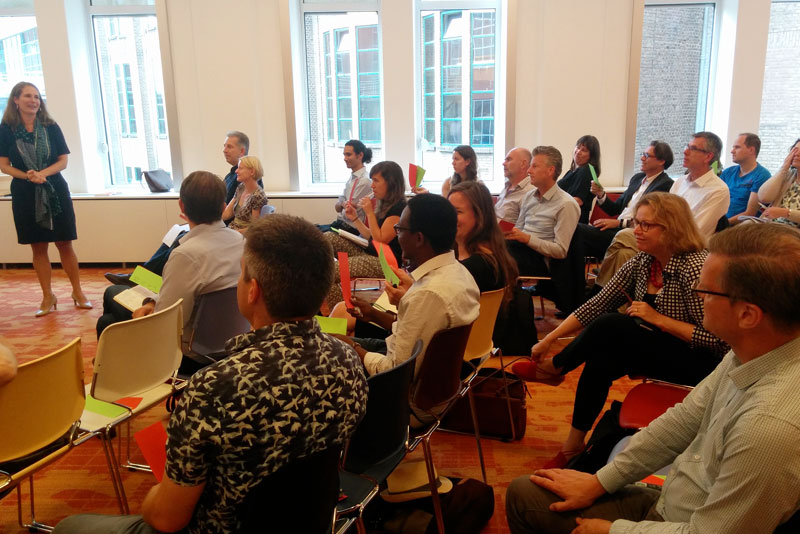 One participant raised the need for a more comprehensive approach to address SDG challenges, such as youth unemployment:

“NGOs may continue training and coaching young entrepreneurs all over Africa, but this won’t make sense if there is little focus on markets and if banks don’t come forward with financing.”

How to get companies fully on board?
The next member of the panel, which symbolically represented a four-sided ‘Dutch Diamond’, brought forward a private sector point of view. Michel de Bruin of Agrico argued that in complex environments such as Kenya, there are many unexpected developments that affect the PPP’s process and results.

In the case of the Dutch government supported project ‘Food security by vertical integration in a new Kenyan potato chain’, there have been delays in certification of potatoes, hampering the progress of the entire project. An environment which is not as ‘enabling’ as its expected: commitments on paper did not materialise which turned out hard to influence for a company.

Agrico argued that it is not fair to bear the brunt of the policy failure which characterises Agrico’s case.. Its scope goes well beyond the level of this PPP and resulted in unforeseen and uncontrollable risks and costs:

“We need to work together with Dutch government to achieve changes, therefore we need co-ownership, meaning government being a committed partner to support in the change.”

Carrying such risks however implies predicaments around governments’ accountability. Participants agreed that the integration of aid and trade still requires efforts and reflection on the type of dilemma as mentioned above.

More sense of urgency on SDGs needed
Another point of view came from NGO Hivos, lead partner of the Dutch government supported project ‘Sustainable and Secure Smallholder Systems @Scale’, currently being implemented in Kenya. This PPP suffered some delays due to the new county structure in Kenya, but is now in its finalisation phase.

Hivos’ Sjoerd Panhuysen argued that the SDGs are a good framework but setting the timeframe of 2030 is a missed opportunity for the coffee sector. Companies and retailers had been committing to a Vision 2020 before the SDGs were launched, but this momentum was lost as they quickly embraced the SDGs timeframe of 2030.

Multiple roles by Dutch government in PPPs
Donors can help by supporting advocacy roles by NGOs, and PPPs are a suitable format provided NGOs can play their genuine roles. Can Dutch government also broker such partnerships, or be a partner while fund the project at the same time? In the discussion that followed, the tension between these different roles – donor, broker and partner – emerged.

In the panel, knowledge institutions were also represented. Stella Pfisterer of the Partnerships Resource Centre argued that it is difficult to play these roles simultaneously, but as emerged from her research, in practice the Dutch government does play all these roles. Embassies in developing countries, for instance, are often confronted with implementation issues of PPPs that require their intervention, or facilitation, for example when it comes to partner country government contacts.

“Dutch embassies emphasise that it is easier to facilitate a partnership project when they are more actively involved but the level of engagement is often hampered by a lack of capacity.”

The dilemma’s around these tensions will be analysed in a PPPLab Exploration soon to be published, focusing on the role of the ‘Dutch Public P’ with a specific focus on Dutch embassies in PPPs.

This blog was published earlier on the website of the PPPLab

Send this to a friend